Here’s a project I’ve been wanting to do for awhile now. First some background: There is a Spanish gaming magazine by the name of Hobby Consolas. Back in 1997 or so they released a book unhelpfully named “Mangas & Videogames”. It contains hyper-weird Spanish game-related comics, with some of the most bizarre crossovers I’ve ever seen. I’ve been waiting around for a Spanish translator to join our fold, and now one has, so we’ve done a chapter, yay. Here’s today’s release, a chapter in which NiGHTS, Kirby, Link, and Heihachi play a game of D&D (or some other fantasy tabletop roleplaying game): 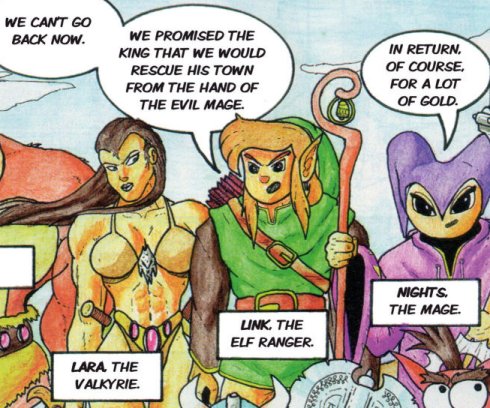 If you’ve been wondering about that frame of Bub we’ve been using in the blog banner, this is where it’s from. These pages are (all but the last one) 2543×3503, so as a special service I’ve also made a half resolution version in case anyone would prefer that.

If anyone out there owns this book, please get in touch with us. We’d like to translate it all, but portions of it I can not find scans of, and other parts I can only find poor quality / lower resolution versions of. I’d like to someday be able to release a huge high quality full book version. Anyway, enjoy this chapter, hopefully more will be coming soon.